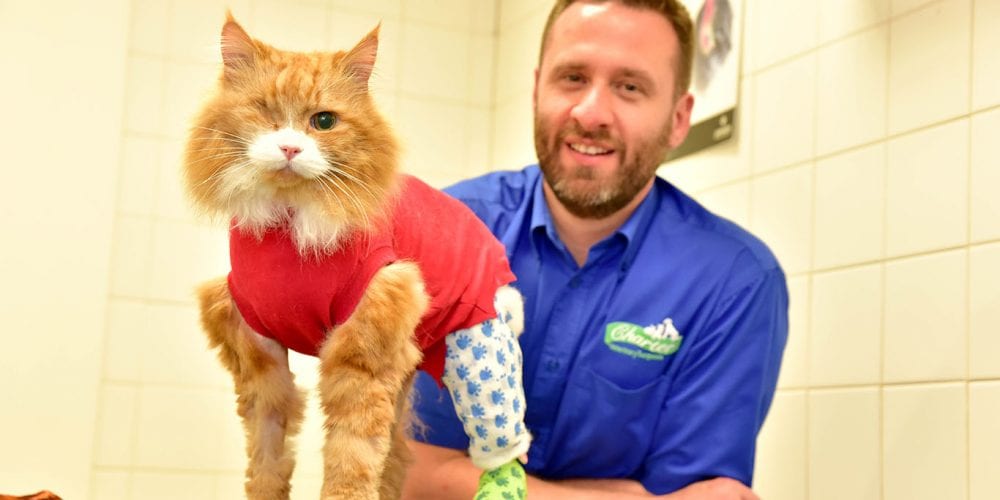 The owner of a one-eyed cat who survived a 150-mile trip under the bonnet of a car has praised the vet team whose dedicated care has helped him pull through.

Twelve-year-old Ronney suffered first degree burns after climbing under the bonnet of a car belonging to a neighbour who then drove from Burslem in Staffordshire to Wiltshire to visit relatives.

Neighbour Steve Willis only discovered Ronney four days later after recognising him from posters his distraught owner Katrina Smart had put up around the neighbourhood to find her missing pet. 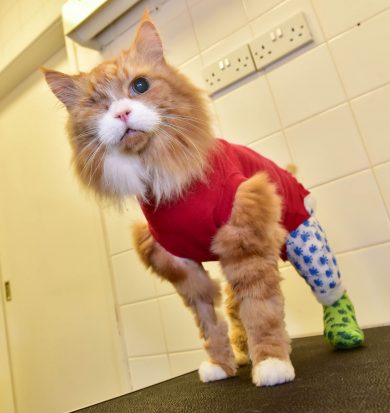 The ginger and white cat, who had to have part of his tail amputated due to the damage caused by lying on a hot car engine, was nursed back to health during round the clock care by vet Steve Calveley and his team at Charter Veterinary Surgery in Newcastle under Lyme – part of the independently-owned Willows Veterinary Group.

And the veterinary team turned to nature to speed up Ronney’s recovery using a special manuka honey treatment to aid the healing process.

It comes after Ronney needed to have an eye removed following an infection earlier this year.

Owner Katrina Smart, 46, who has had Ronney from a kitten, said: “I think Ronney should be renamed Lucky because he has had a terrible few months but has come through it incredibly well.

“The care he has received from Steve and the nurses at Charter has been amazing, I’m really grateful. Nurses even went in on their day off to see Ronney.”

Charter Veterinary Surgery is part of the independently-owned Willows Veterinary Group. The group has a network of 25 small animal surgeries, a referral veterinary hospital, two equine centres and a seven-office farm practice located across Cheshire and into the Wirral, North Wales and Staffordshire.

Vet Steve said: “Ronney has become something of a celeb here, everyone loves him. They say cats have nine lives but I think in Ronney’s case it’s more like 12.”

Katrina, a nurse, who lives with her 20-year-old son Gabriel, continued and said: “We’ve had Ronney all his life, since he was born on my living room floor after I rescued his pregnant mum Sassy.

“He’s a lovely natured cat and never goes very far. He is a bit of a scaredy-cat and the furthest he ever goes is along the walls of the houses nearby so it was unusual when he went missing. We knew he wouldn’t have gone far and my son Gabriel went out looking for him, while I put up posters and knocked on doors.

“This all happened on a Thursday and, as the days went by, I was getting really worried. The worst bit was not knowing what had happened. On the Sunday evening, there was a knock at the door and it was a gentleman who lives next door but one. He had Ronney in a toy box and said, ‘I think I’ve got your cat.’ I couldn’t believe it, particularly when I found out how far Ronney had travelled – on a hot engine! I was so grateful I bought him wine and chocolates.”

Katrina, who immediately contacted vet Steve, continued: “Ronney was extremely traumatised so I kept him quiet and he had a few sips of water and a tiny bit of tuna and salmon.”

Ronney was admitted to Charter Veterinary Surgery where vets found first degree burns which had gone through his skin to muscle underneath. 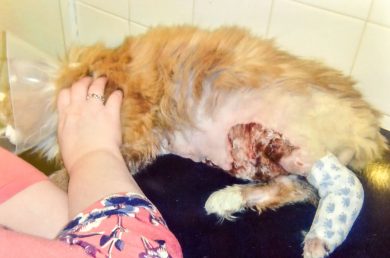 After having part of his tail removed, Ronney was also treated for burns to his stomach and legs other parts of his body. Steve said: “Ronney was in a poor way when he was admitted to the surgery.

“We couldn’t believe how he had survived such an incredible experience. He was in intensive care and, after sorting his tail out, we turned our attention to the extensive burns he had suffered.

“This included treating the burns with manuka honey, which contains certain antiseptic properties that helps the healing process.

“I also think Ronney’s fantastic recovery is in part down to him being a very good-natured cat. He’s so laid back, we don’t even need to sedate him when we’re carrying out procedures. I also think it’s down to my brilliant team of veterinary nurses who have been totally dedicated to Ronney’s care throughout the process.”

Steve hopes that Ronney can return home in three to four weeks, while in the meantime, owner Katrina visits him on her days off.

“I visit Ronney around three times a week and am really looking forward to having him home permanently,” she added.

For more information about Willows Veterinary Group go to www.willowsvetgroup.co.uk or Facebook @WillowsVetGroup