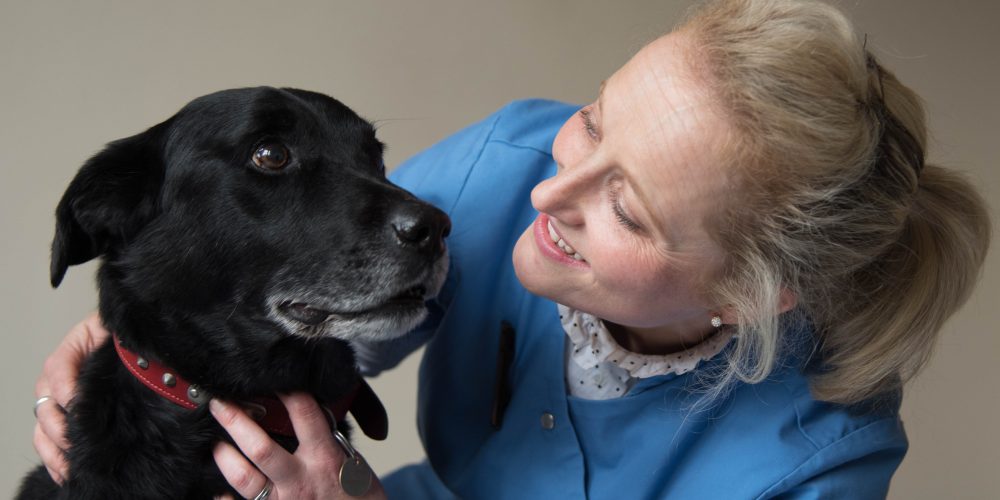 A PLUCKY pooch whose ‘tail’ started at a Wilmslow veterinary surgery 16 years ago has visited staff to help celebrate a recent outstanding award for client service.

Henry, the border collie/labrador cross was born at Broom Cottage Veterinary Surgery in 2001 and staff have since been on hand to help him whenever he’s feeling ‘woof’.

His owner, Diana Hartley said she ‘can’t speak highly enough’ about the surgery, which is part of the independently-owned Willows Veterinary Group, and said their first class care for pet and owner is ‘deserving of every award’.

Diana and Henry were special guests to the vet surgery on Chapel Lane after it was rated outstanding for client service by the Royal College of Veterinary Surgeons (RCVS) – which runs an accreditation programme for practices in the UK.

Broom Cottage is part of Willows Veterinary Group which offers a wealth of knowledge and expertise through 25 small animal practices, a referral veterinary hospital, two equine centres and a seven-office farm practice, located across Cheshire, into North Wales, the Wirral and Staffordshire.

It is one of seven surgeries in the group which have recently been inspected and received top marks for their client care.

Heading up the team is branch manager, Katie Green who said she gets a tremendous amount of satisfaction from seeing the special bond between pet and owner.

The mother-of-two, who is married to a dairy farmer, recently lost her own elderly dog, but still has a trio of cats, two guinea pigs, two pygmy goats and six sheep and lambs.

She said: “I’m very proud that the hard work of team of three vets, two nurses and two reception staff has been recognised by this outstanding award.

“Client service is what we’re all about, we pride ourselves on our attention to detail and treating other people’s pets as our own.”

The RCVS promotes the gold standard of care and treatment for animals and around two years ago, it launched a more detailed assessment process for both vets seeking accreditation and their clients. 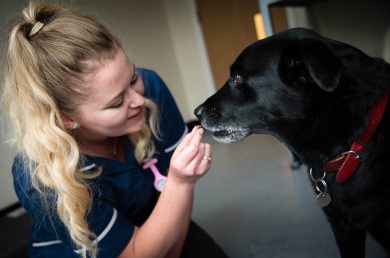 The Broom Cottage team were put through their paces including having to demonstrate bereavement counselling skills and their empathetic handling of difficult situations when owners are worried and upset about their much-loved pets.

They also showed how they communicate with clients in a variety of ways such as text, email and by post for reminders on vaccinations and flea and wormer treatments, as well as demonstrating they value and act upon feedback to continually improve their service.

Mrs Hartley knows only too well how efficient and caring staff at the surgery are.

The grandmother-of-two from Wilmslow said: “It was the head vet at Broom Cottage 16 years ago who delivered Henry by caesarean section on October 2, 2001. He was one of eight pups to be born.

“He’s been a wonderful and loyal companion ever since.

“When my late husband George was bed-ridden, Henry would sit by the bed and I used to put George’s hand on his head.

“He is a very gentle dog, he’s like my shadow.”

Mrs Hartley added: “Luckily Henry has been in good health over the years but now suffers with arthritis in his back legs.

“He’s ok, he’s happy and the staff at Broom Cottage look after him very well, I can’t speak highly enough about them.

“I wouldn’t go anywhere else, they deserve every award going because their care is brilliant, it’s first class.

“The way they take care of the animals and their owners is amazing.”

Vet Katie, who qualified 14 years ago, has worked for Willows Veterinary Group for nine years.

She said: “Mrs Hartley and Henry are examples of very long standing clients of our practice who would agree that providing a good service is at the heart of everything we do.

“Henry was delivered by c-section and started his days here so he’s got a long history with Broom Cottage.

“I love being privy to the incredible bond between pet and owner, like the one between Mrs Hartley and Henry, and playing a small part in looking after that ‘member of the family’ or sometimes sole companion.

“I also get a real buzz from seeing new, first time animal owners develop a bond with their new pet and assisting with the journey that it takes them on.”