Alfie’s Canine Acupuncture is on Point 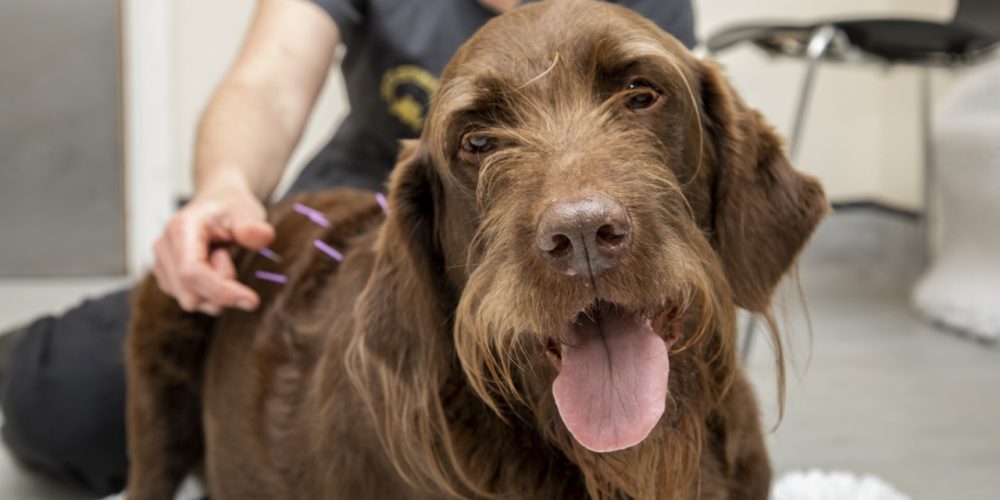 A “DEPRESSED” dog suffering with stiff joints and severe back pain has come on leaps and bounds thanks to animal acupuncture.

Alfie the Labradoodle used to “walk like Bambi” before he started the alternative treatment at The Firs Veterinary Surgery in Kelsall, part of Willows Veterinary Group.

Vet, Fiona Wall carries out the ancient Chinese therapy at the practice, inserting needles into six-year-old Alfie’s back to relieve pain through stimulating natural pain relief chemicals produced by the body.

And the results have been “amazing” according to Alfie’s owner, Sue Thomas, who now says he’s a “different dog.”

Sue said: “I’ve had Alfie since he was a puppy and everything seemed fine at first.

“But when he got to five months old, he became very wobbly on his paws and so he was referred for tests. An MRI scan revealed he had an unstable vertebrae in his neck.

“It was advised not to operate on him until he was a little older but when he was eight months, he developed other movement problems.

“He was limping and became very depressed and was put on restricted exercise.

“After that, he seemed to be ok for a while, although his movement was never normal.”

The 58-year-old retail manager from Kelsall said it was around two years ago that Alfie appeared depressed again.

“He wasn’t running around with the other dogs, he wasn’t happy and he was sensitive around the latter part of his back.”

Further X-rays revealed he had hip dysplasia and Sue was worried that her only real hope of improving Alfie’s mobility and reducing his pain would be surgery.

She was out walking Alfie one day, when another dog owner commented on the way he walked.

Sue said: “The man told me his dog used to walk exactly the same way before having acupuncture.

“That was when I decided, before going down any other route, that it was worth giving it a go. I was referred to Fiona and the rest is history.”

Vet of 20 years, Fiona who works for the practice – owned by Willows Veterinary Group – has been carrying out veterinary acupuncture for six years as a holistic supplement to traditional veterinary care.

Willows Veterinary Group offers a wealth of knowledge and expertise through a network of 25 small animal practices, a referral veterinary hospital, two equine centres and a seven-office farm practice, located across Cheshire and into Greater Manchester, North Wales, the Wirral and Staffordshire.  Willows is accredited by The Royal College of Veterinary Surgeons.

Fiona, who also provides the treatment to cats, horses and rabbits, said: “What we do is place small needles into painful parts of the body to trigger the brain into releasing natural chemicals to try and block the pain pathways.

“It’s a natural pain relief with very few side effects.

“Generally we use it for muscular skeletal pain, although it can be used for things such as bowel or kidney issues.

“In Alfie’s case, he was very depressed, he was slow to rise from his hind end and had compression of his spinal cord in his neck, and a history of hip dysplasia. He was noticeably wobbly when he stood and walked.

“To avoid surgery, we started acupuncture and his movement began to improve.

“He went from a dog with a poor quality of life to a much happier dog in such a short space of time and we will continue with the regime for as long as he’s benefiting from it.

“I’m really pleased with his progress.”

Alfie has regular sessions where Fiona now uses around 20 larger needles on his whole back, which have more effect when targeting painful areas.

“He knows what’s going on, he’s really relaxed, he accepts the treatment readily and he loves the attention,” Fiona added.

“It’s nice that he’s avoided major surgery, which like any spinal surgery carries a risk of paralysis.

“Acupuncture can often be a nice back-up tool for treatment.”

Sue, who also has two other dogs and two horses, said Alfie has been having acupuncture for around 18 months now and claims it has made the world of difference.

“Alfie’s like a different dog now. His personality has come back,” she said.

“I noticed a change in him within a month of him starting the sessions.

“Alfie is so much happier and when he’s happy, I’m happy.

“His quality of life is so much better now so I’d highly recommend acupuncture to others.”